Kimett is celebrating May birthdays with a design that combines the birthstone Emerald and the birth-flower, Lily of the Valley. 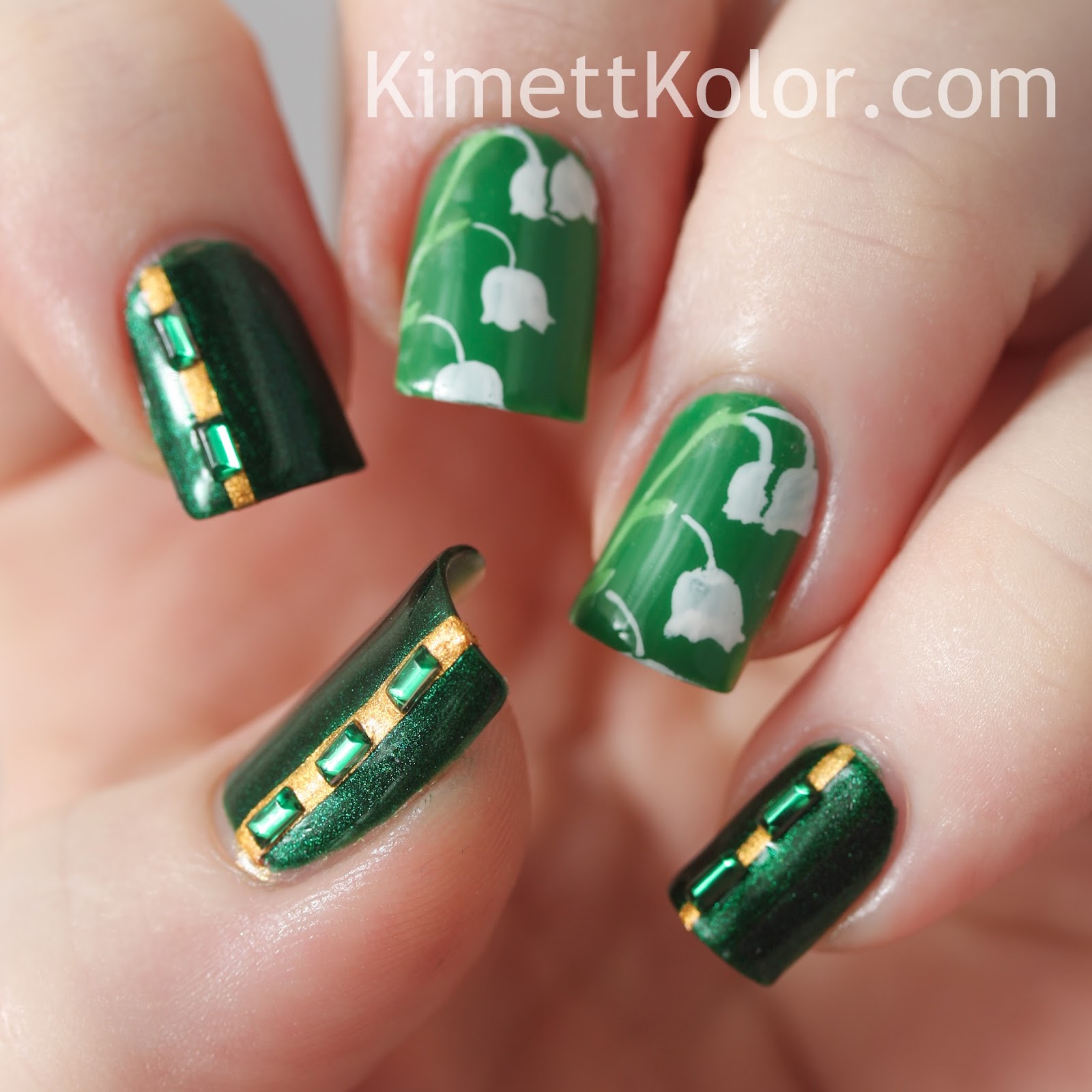 In case you missed any, you can read what’s up with these monthly Birthday designs on Kimett Kolor with the links below:

The beginning of this design started with the two green base colors, Nubar‘s Greener and Revlon‘s Posh. The former is a perfect emerald green with depth and intrigue – just like the gemstone. And, Posh is a juicy green crelly (part cream, part jelly) formula which I thought would be a good base for the flowers. 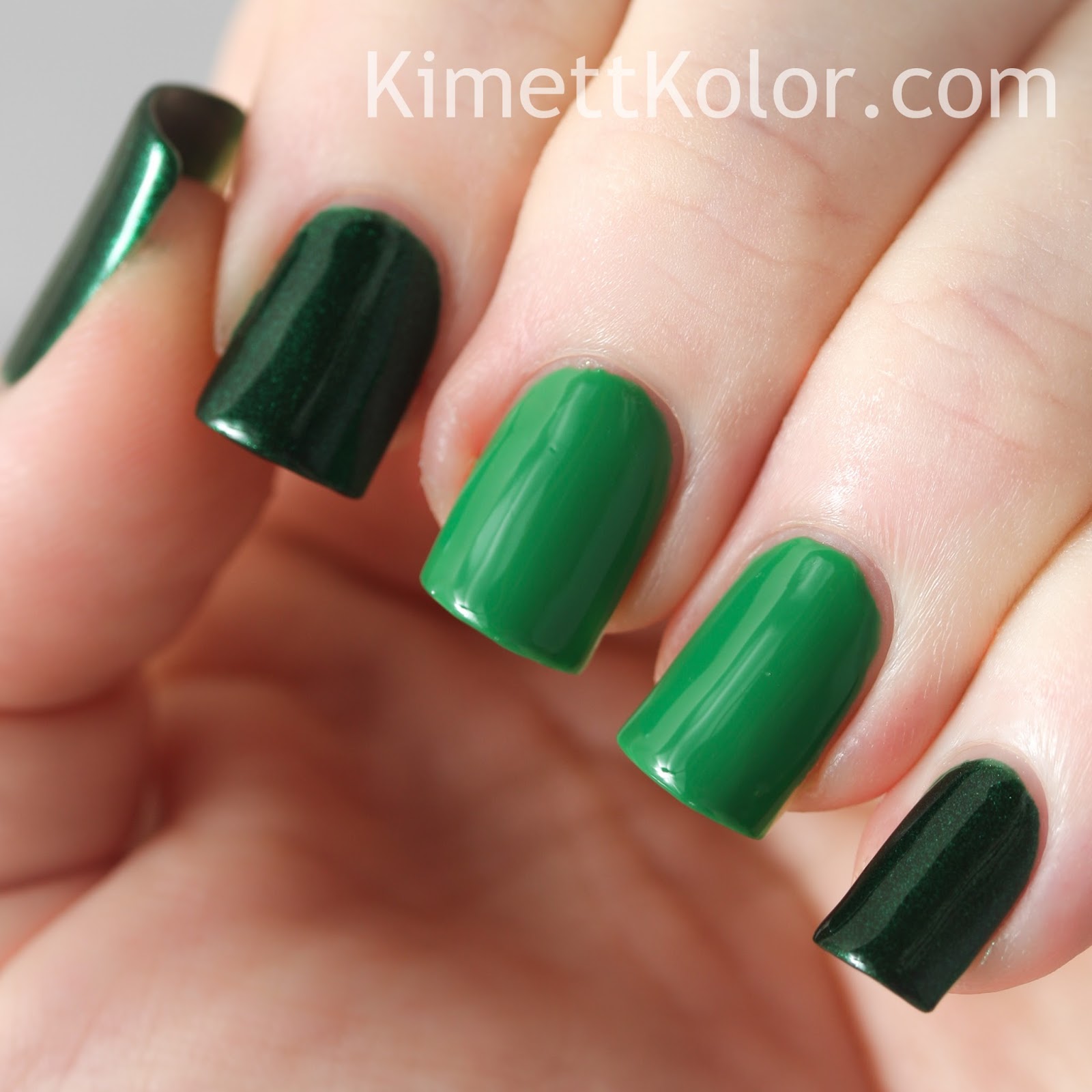 Next, I added the gems and the flowers. I was beyond excited when I saw that Anni of Vivid Lacquer had a stamping plate with Lily of the Valley flowers!! (At time of this post, it’s in stock on her Etsy page.) Really, I might of peed a little! Too gross? Sorry. But…they are one of my very favorite flowers, despite their poisonous nature they are so elusive (shade loving) and yet so cheerful. 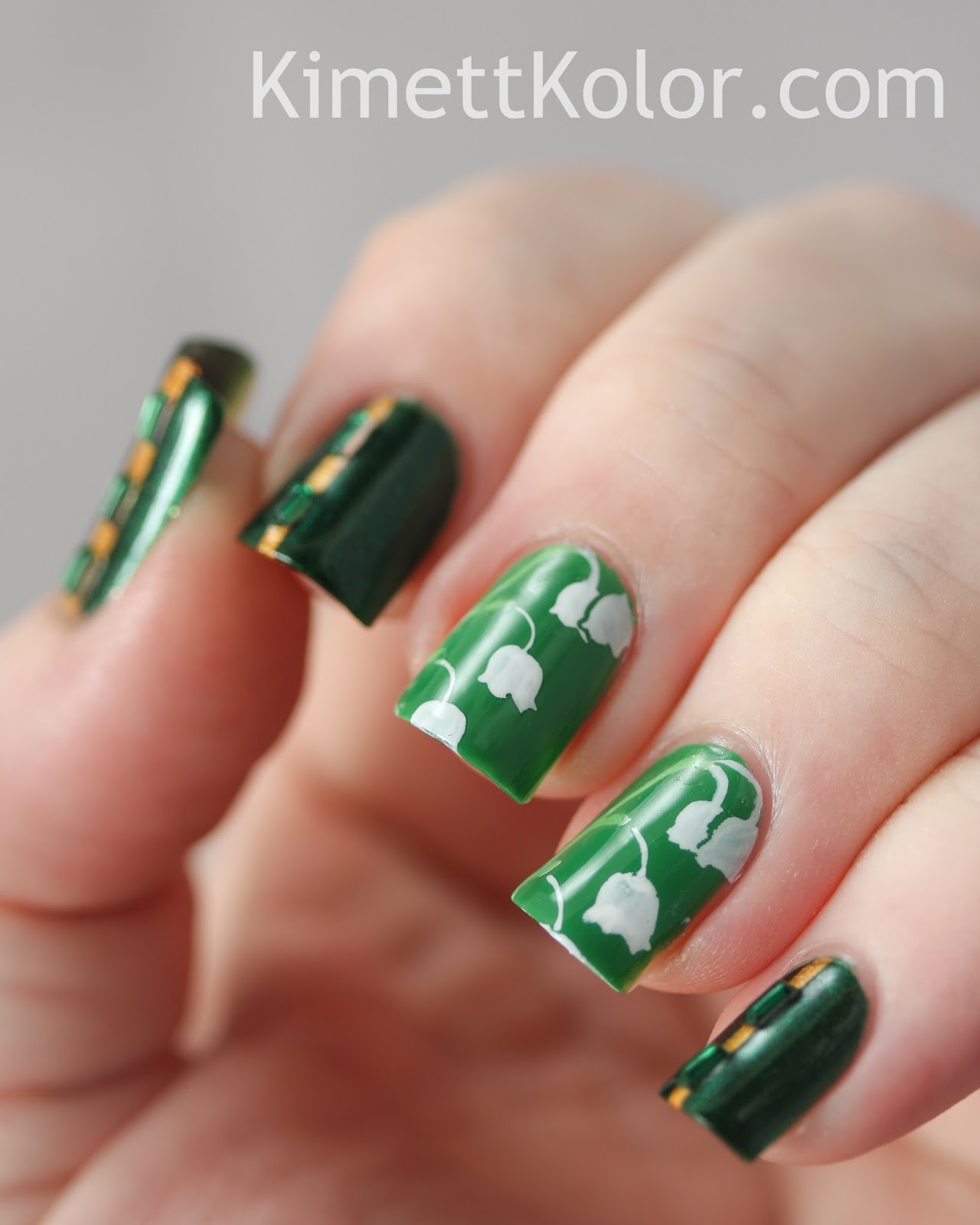 I had a bit of trouble stamping – but it is 100% user issue, the stamping plate is perfect. When I tested the images on a flat surface, they came out shaped normally. But the combination of my very curved nails and the slick surface, I experienced some smudging of the flowers. Some people swear by using a layer of topcoat between the base color and the stamping because it provides an opportunity to remove the image in case you need to re-do it. (Which I did on my ring finger actually.) For me, sometimes it can add a challenge in that the surface is so slippery that it doesn’t grab the stamping as easy as without a layer of topcoat. Stamping is a pursuit of never-ending trial and error.

I had just washed my hands before taking the pictures (zooming in for the close crop below) so you might notice the moisture on my nails (photo should be clickable for a closer look). I thought it was kinda cool because you’re likely to see these flowers with moisture on them. 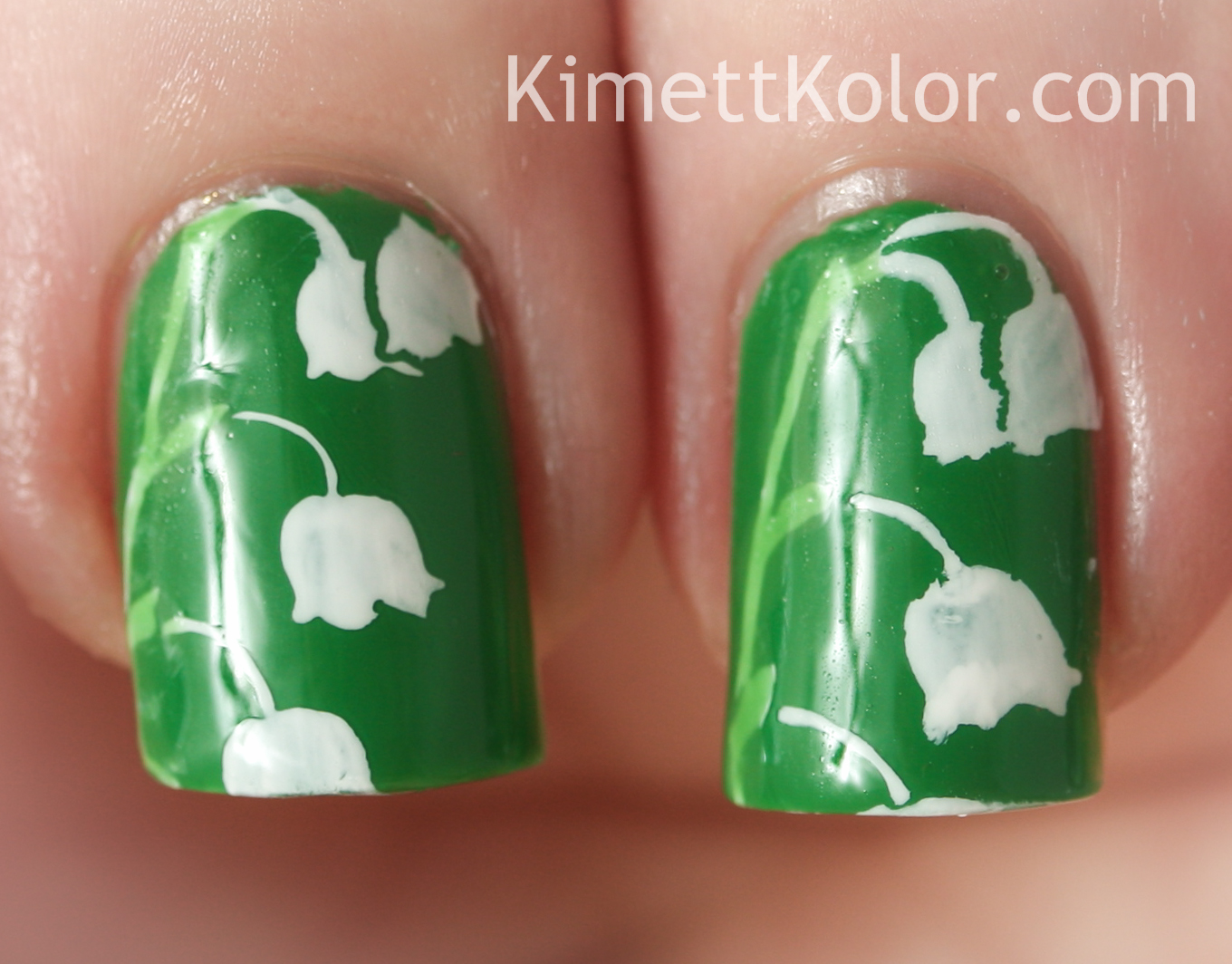 After stamping, I dabbed on a bit of a light green jelly polish over the stems of the flowers since I stamped the whole image in white. I can’t wait to play around with these again. I kept picking up my hands to look at these over and over.  As a dear family friend says, “Anywho….”, let’s move on, shall we? 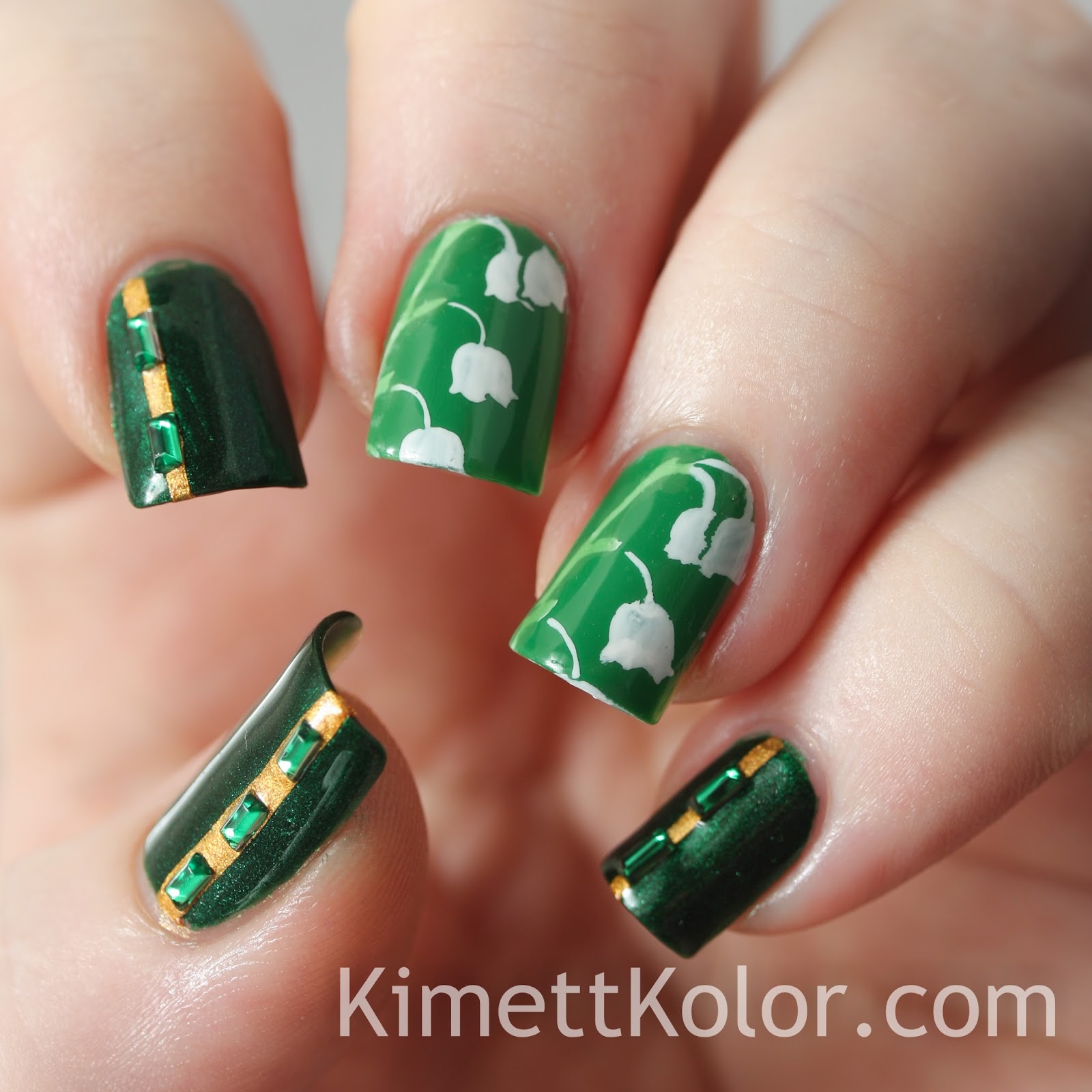 Using 3-dimensional decorations on my nails is still the most awkward thing for me to incorporate into my designs. And, I choked, once again, a bit with these. I had a better idea in mind and then I went and made these. Oh well. They’re not quite a full-blown fail, but they’re not necessarily a success either. To give them a little oomph, I used striping tape and painted a silky golden stripe off-center on each nail and another coat of topcoat. Before that dried, I placed 2 or 3 emerald-cut green rhinestones on each nail. 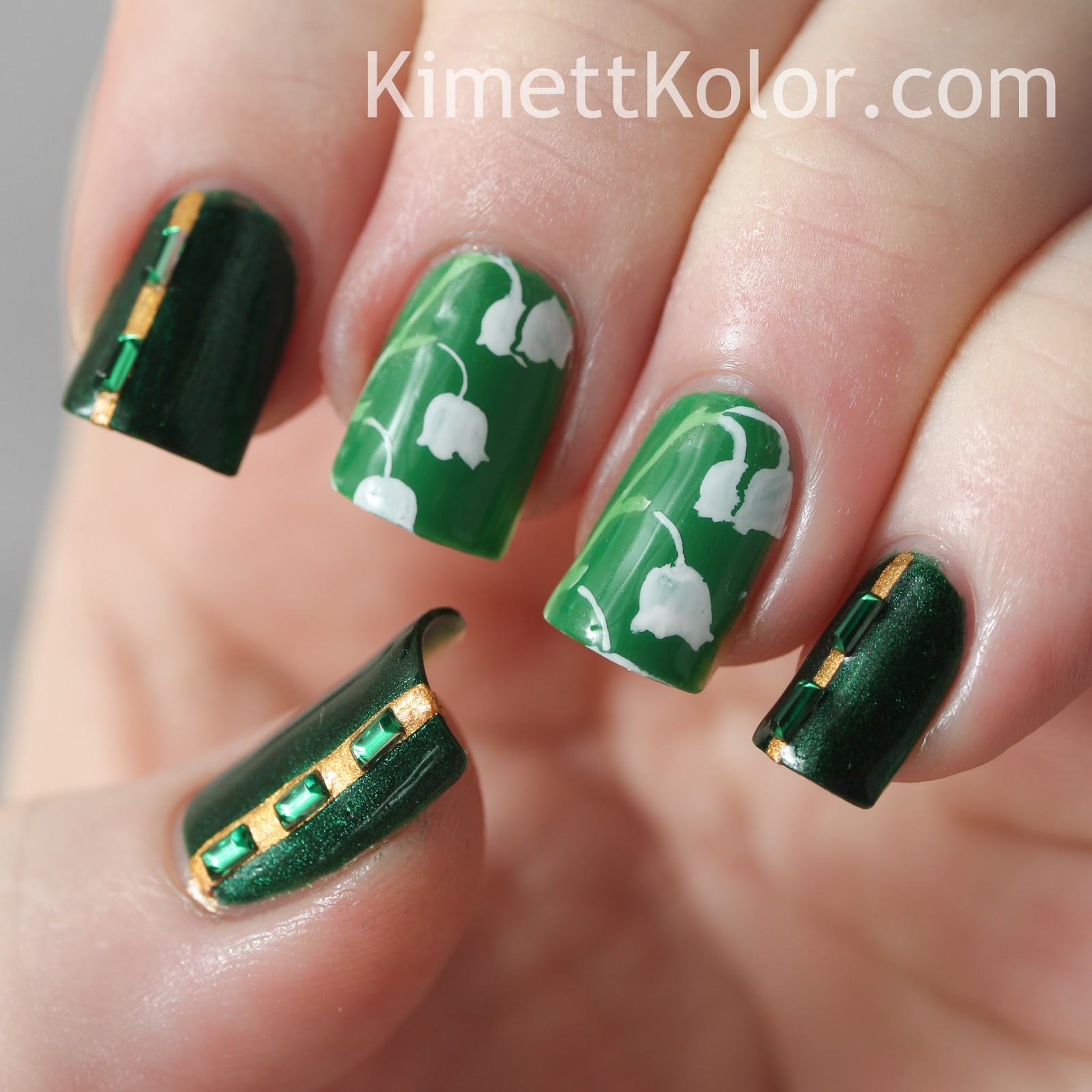 Combining these two looks didn’t make for an overall good-looking design. It fits with my self-created theme, but….not really a great “manicured” look. But – it is an enthusiastic “Happy Birthday” to May babies design! Which was the goal in the first place. 🙂 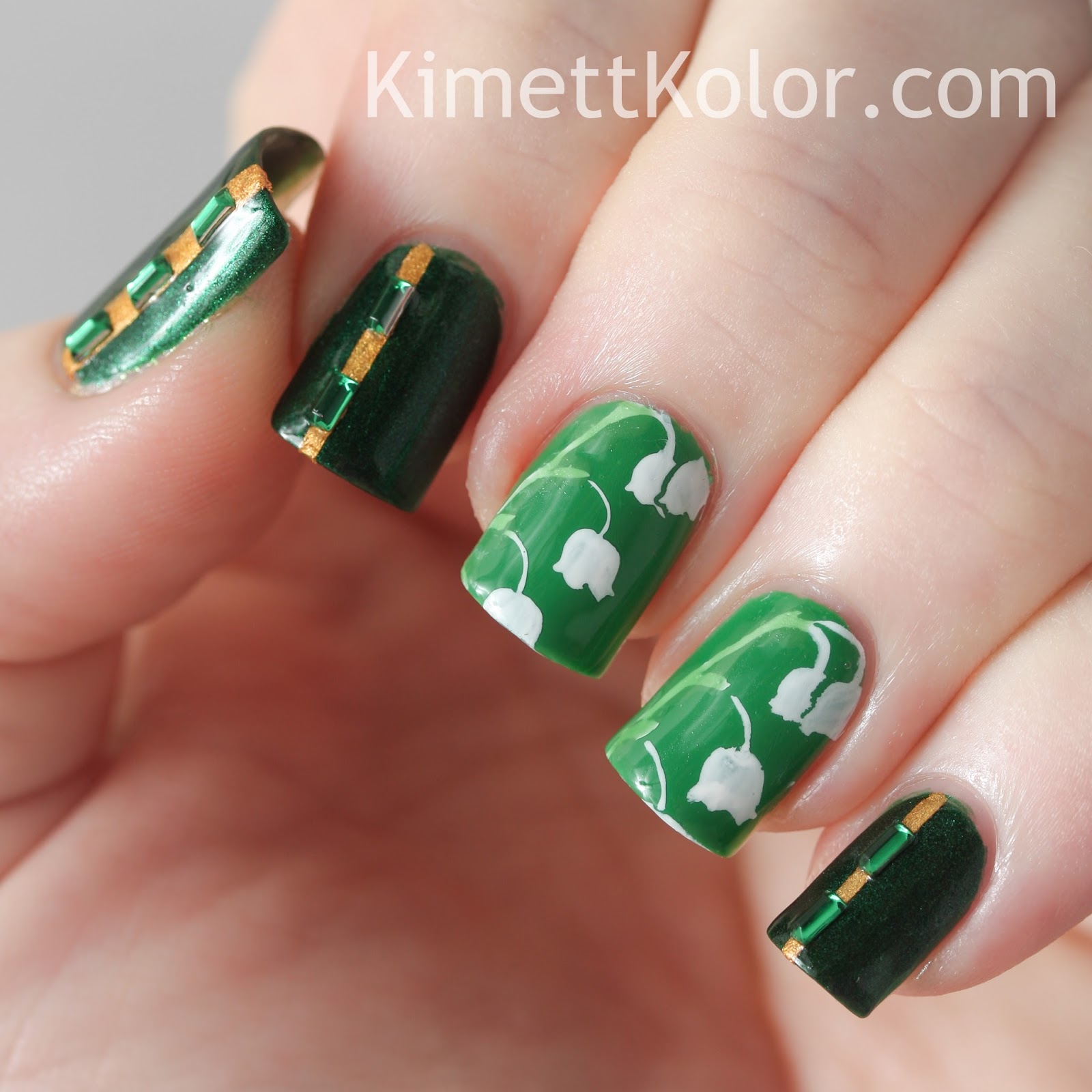 All the polish design details aside: Happy May Birthdays!!!!! Hope your special day has been or will be fun! Let us know how you celebrated and/or what you think of these nails in the comments below. 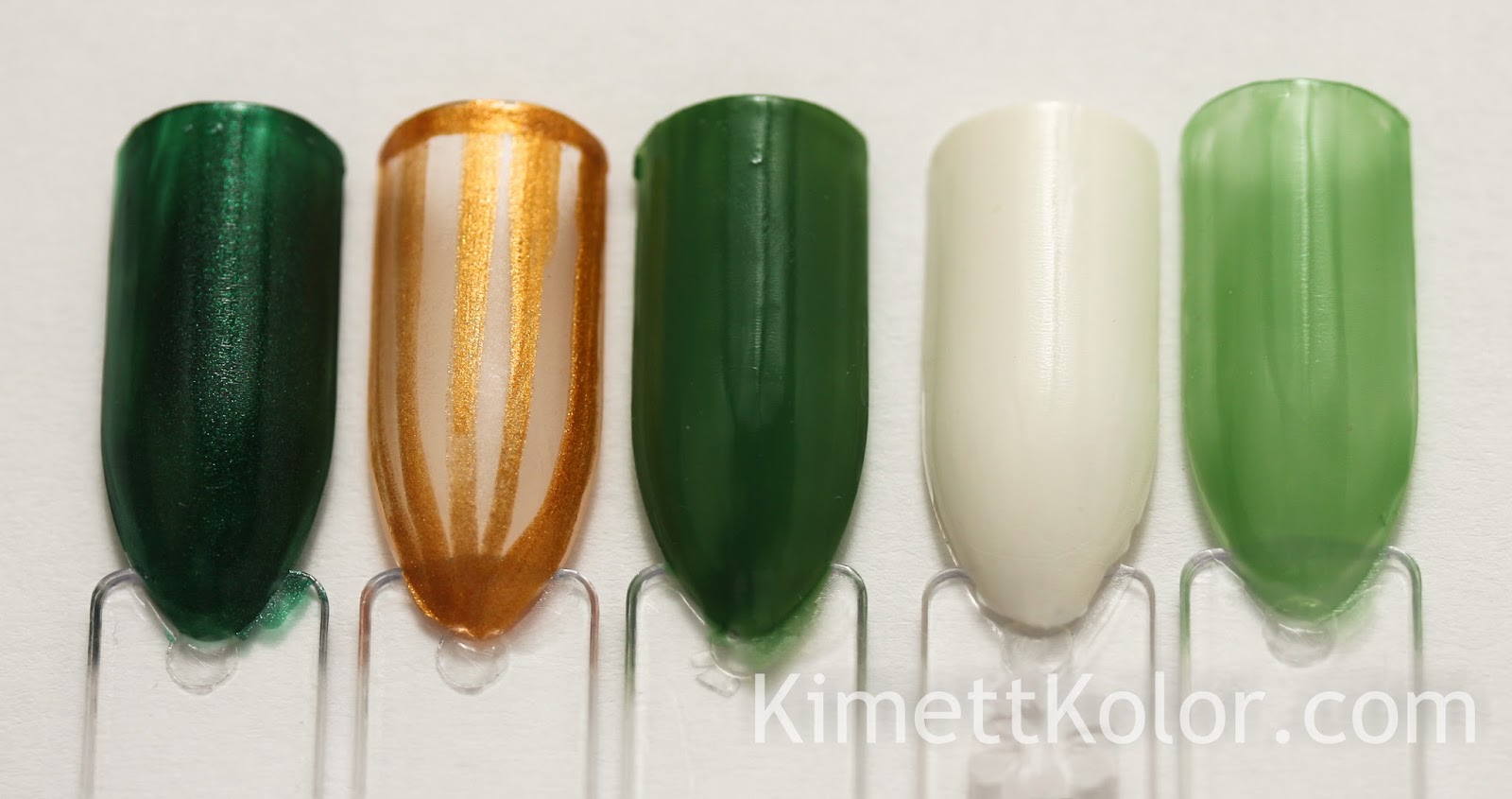 The
word ’emerald’ is derived from the Greek word ‘smaragdos’ which means
‘green gemstone’. The emerald is brilliant green in color. In ancient
Rome, the emerald was associated with rebirth and fertility. It was
believed that wearing an emerald increases clairvoyance, intelligence
and memory in the wearer. The emerald was Queen Cleopatra’s favorite
gemstone and she used it a lot in her jewelry. The emerald is brittle in
nature.

The
word ’emerald’ is derived from the Greek word ‘smaragdos’ which means
‘green gemstone’. The emerald is brilliant green in color. In ancient
Rome, the emerald was associated with rebirth and fertility. It was
believed that wearing an emerald increases clairvoyance, intelligence
and memory in the wearer. The emerald was Queen Cleopatra’s favorite
gemstone and she used it a lot in her jewelry. The emerald is brittle in
nature.

May’s
birthstone is emerald, a green gemstone that heralds the lush landscape
of spring. May is a month in which flowers blossom, grass unfolds, and
everything seems new again. Emerald is a stone that capture’s all
spring’s verdant splendor, ranging in color between a bluish jungle
green to chartreuse. The stone and the month are a perfect pairing.

Lily of the Valley

According to the Old Farmer’s Almanac: May’s birth flower is the lily of the valley, which signifies sweetness, humility, and a return to happiness. If you want to show your loved one that your life is complete with them, give them a few lilies of the valley.

Thanks for stopping by!!!