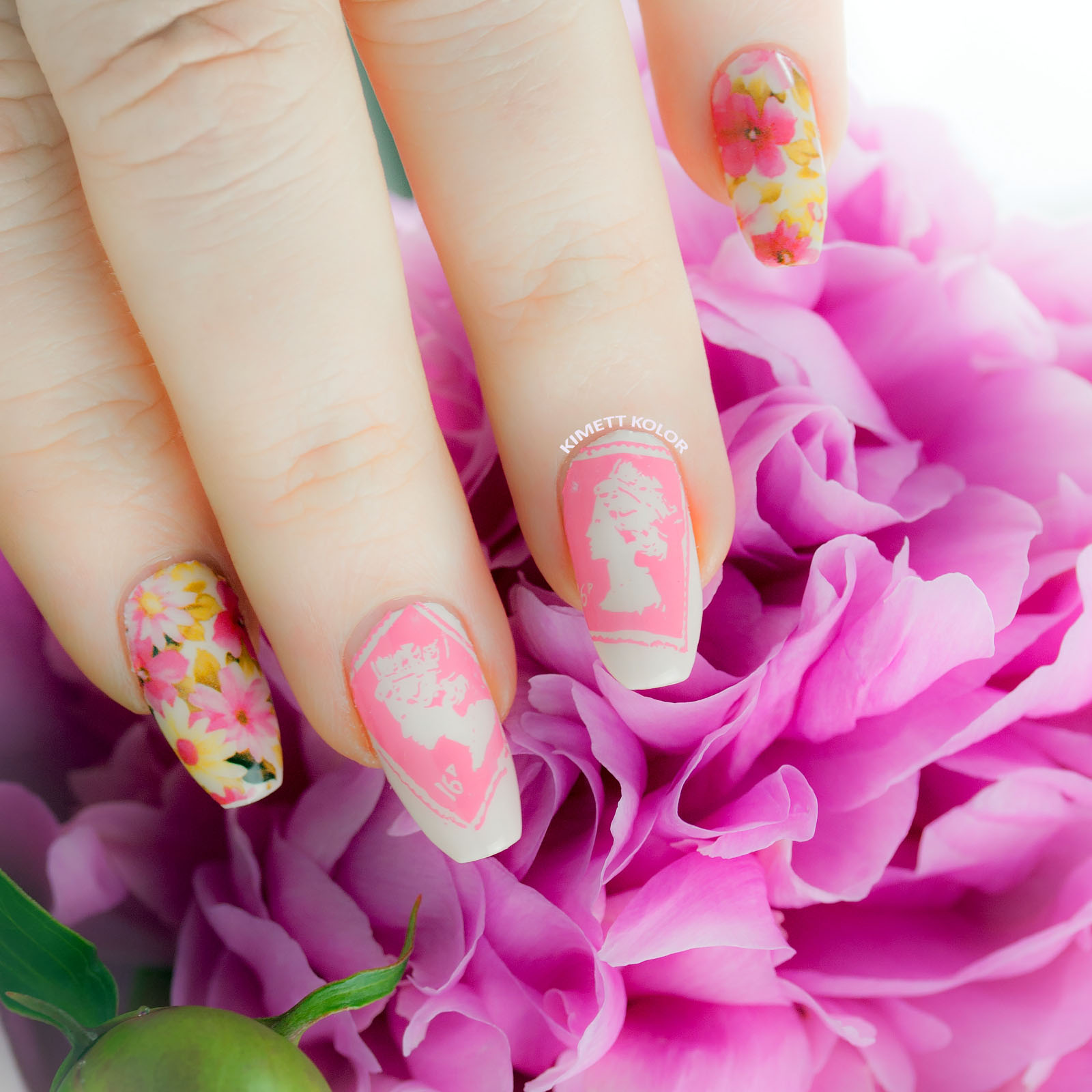 Stamping stamps on my nails as a tribute to my Grammie on Mother’s Day.

Although I’m not sure she would have labeled herself as a philatelist, Grammie enjoyed stamp collecting; and I caught the bug as a kid because she shared her hobby with me. We had lots of fun visiting together while cataloging her stamps. Though, if she were still with us – she’d be quick to tell you that I have very dangerous sneezes! There was one day when we had loose stamps placed in sorting order covering the entire length of the table…until they all went flying because of my need to suddenly expel lots of air from my body. It’s involuntary!! Not my fault!!

Anyways….Happy Belated Mother’s Day to all of the Moms reading this who have had moments when their children and/or grandchildren have caused them similar frustrations. 😉

While I’m babbling and before this post really gets going, I wanted to take a moment to say, “I missed you!”. And, I’m sorry for being MIA from blogging for a bit without warning. Rather than fill the screen with whining words though, let me just say it couldn’t be helped. But, as the wise Mr. Kimett says – “It’s over. Done With. And gone.” Cut to today, I’m really glad to be wiping away the blogging cobwebs (both on my keyboard and inside my brain. LOL) 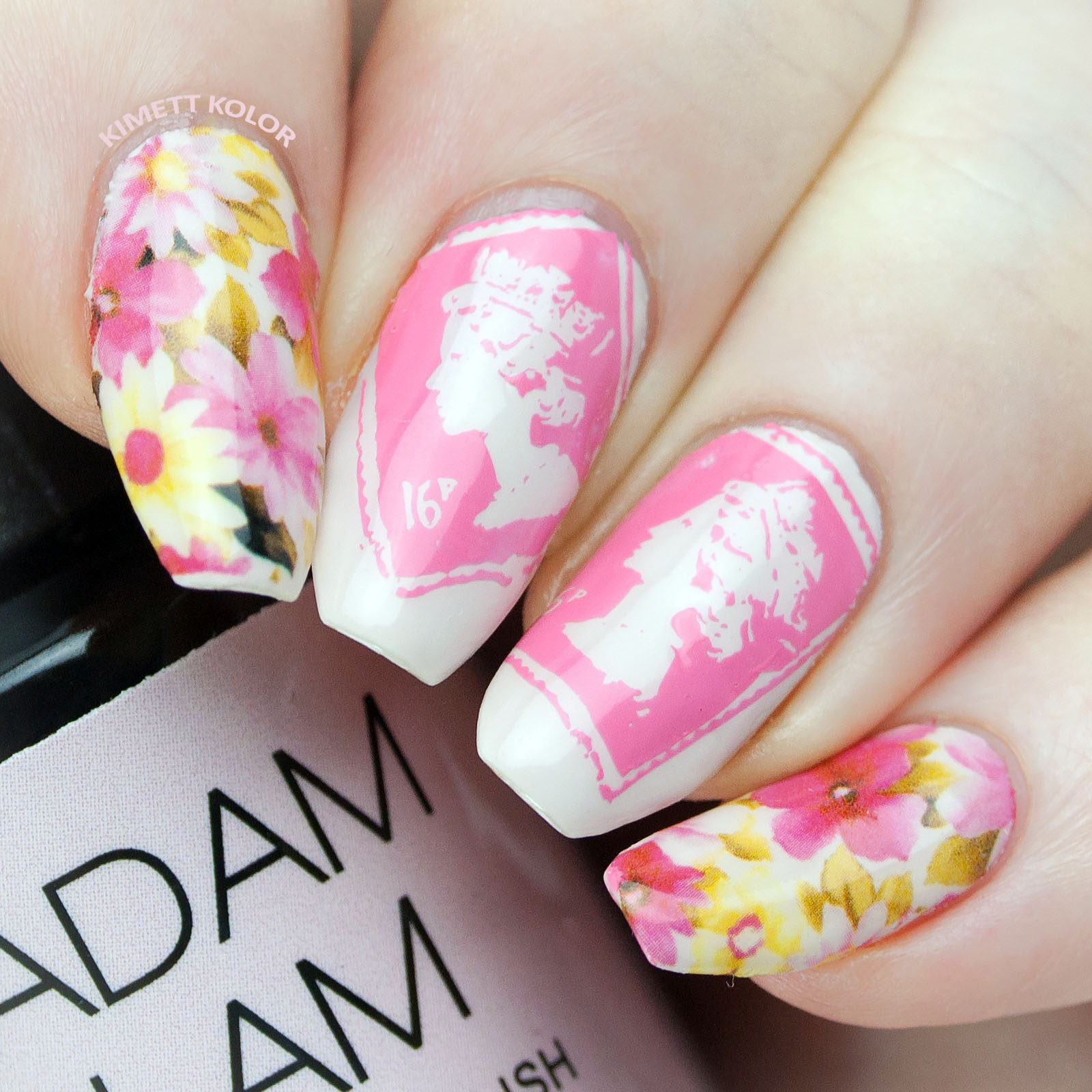 Alrighty — nails are the subject for today. Aren’t these a bit Pretty In Pink too! Although, Grammie wasn’t a huge fan of pink, she would approve of the fact that there really wasn’t a whole lot of effort that went into them. She was a woman of expediency in most things. And we all know, quick nail art definitely has its place!

I’ve been itching to pull out another of the beauties I received from Madam Glam. Today’s look started with a nice refreshing base of a subtle pink-leaning nude called Ballerina. 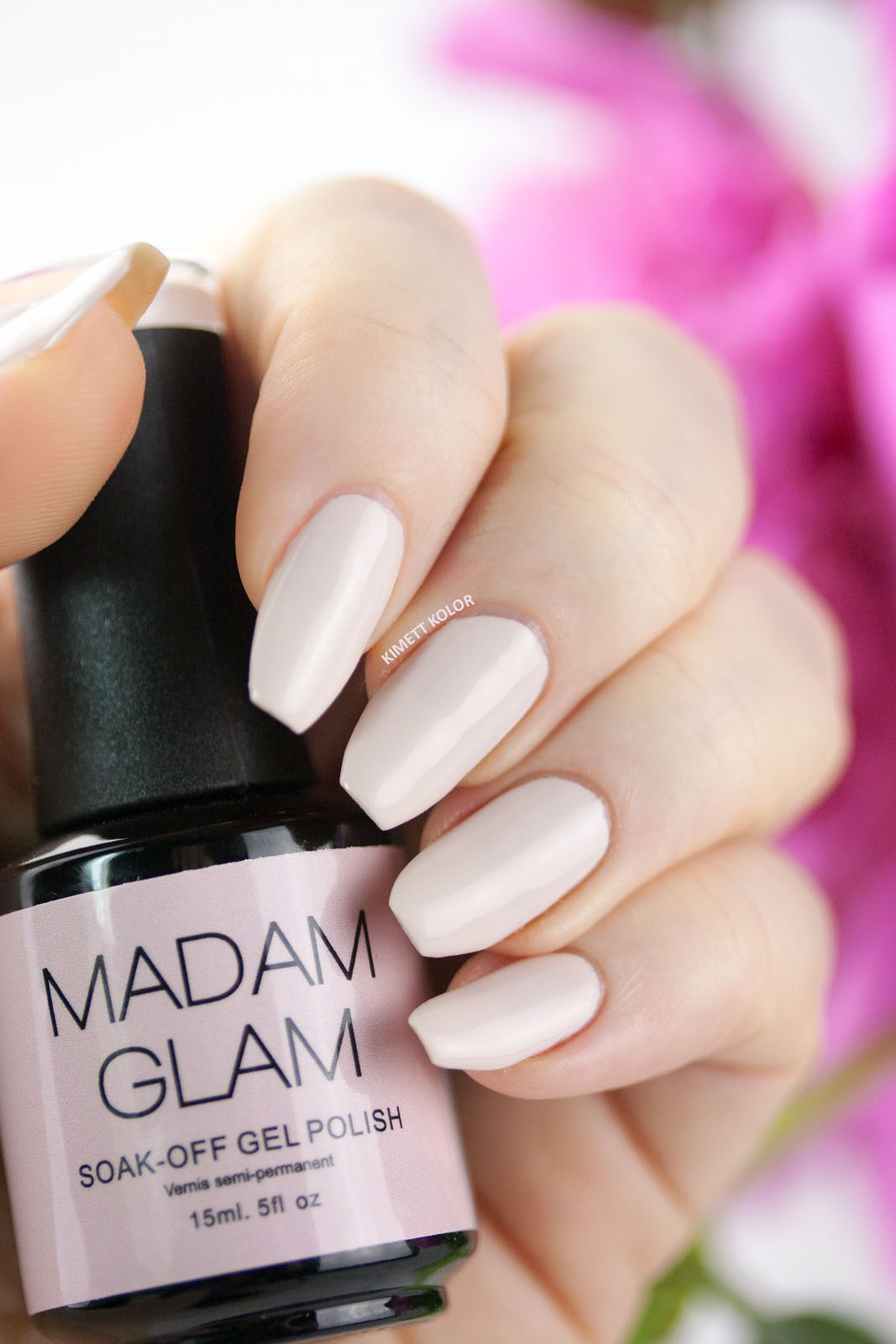 This shade applied very well and is perfect both on its own and as a base for nail art. I can see myself using up every last drop!! Here’s a closer look: 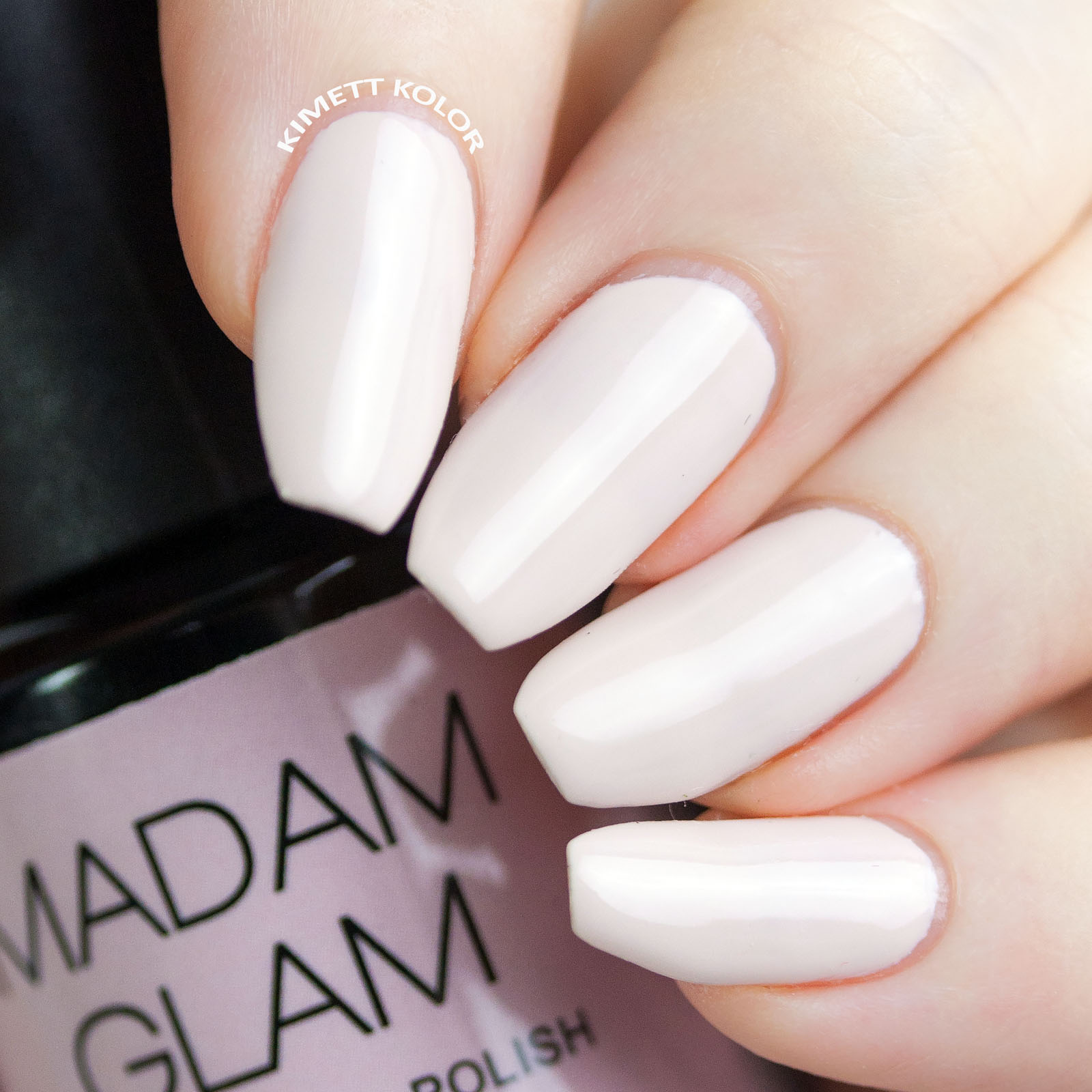 After I had enjoyed wearing the gel color on its own, I simply stamped my thumb, middle & ring finger with the postage stamp image at different angles on my nails using a pink stamping polish. Then, I applied water decals of a pretty floral print to the other two nails.

That’s it! Bam – pretty colors on my nails!!

Oh – the only other thing I did was apply a matte top coat. The pictures above are all glossy, and after this point are all shown with a velvety matte finish. They really felt like velvet too! 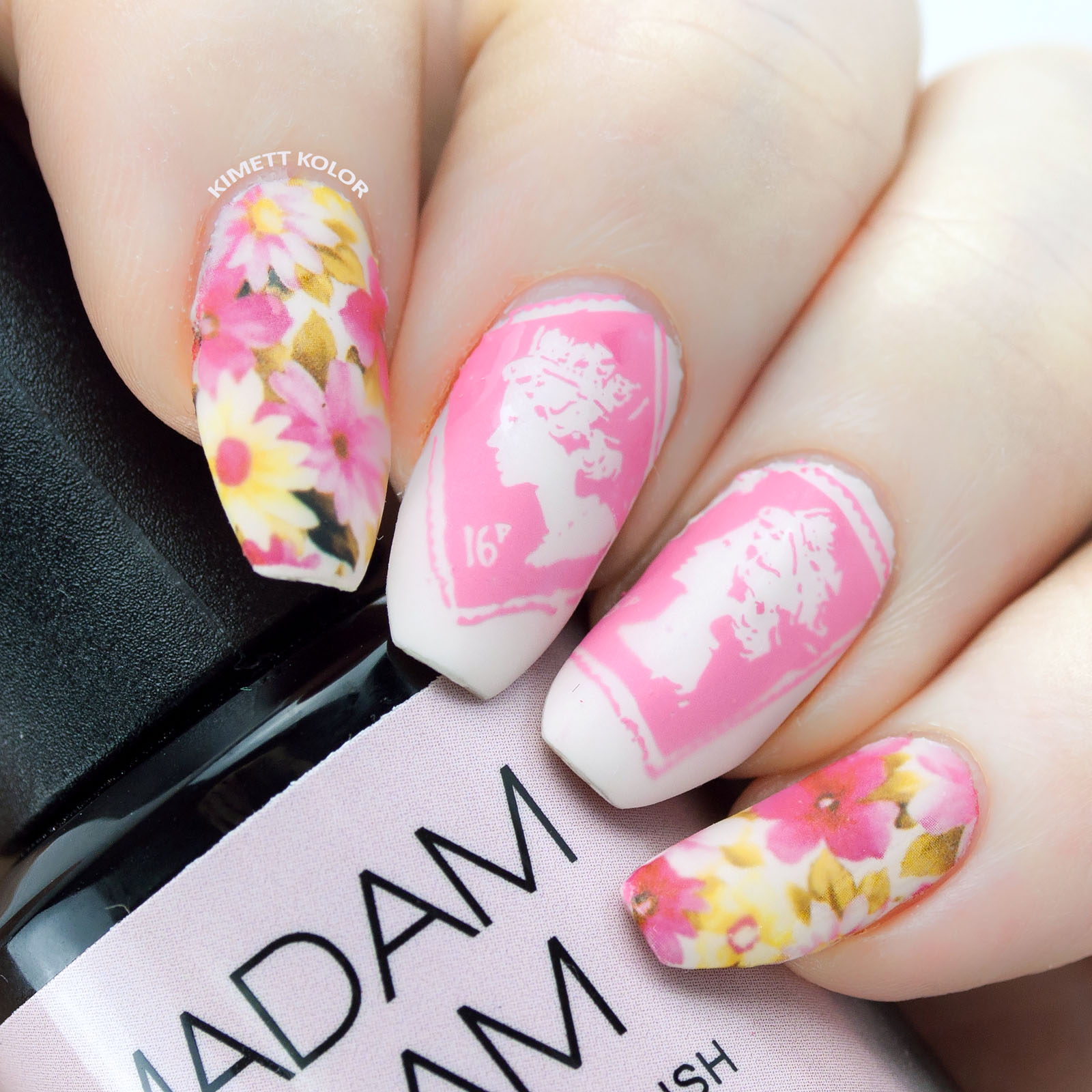 In planning this design, I researched the postage stamp image on MoYou London‘s stamp plate. Being a plate celebrating London, and all things United Kingdom related, it was no surprise that this stamp image is a re-creation of the most widely recognized and used postage stamps in the UK. They are known as Great Britain’s Machin series; named after the artist who sculpted the profile of Queen Elizabeth II used for the image on these stamps.

So of course, I had to see if there really was a stamp issued in the 16P denomination — and yes there was!! A few in fact. The original one was issued in 1983 and it’s color was a brownish gray. (Someday, I hope to find that there is at least one of these in the multitude of boxes, envelopes & tins of uncatalogued stamps that fill up the closet & bookcase to my left. The picture below is from an online catalog.)

Hmmm….these colors don’t really scream Mother’s Day design. Now what? Well, lo and behold, there was another issue in 16P later in 2007 that was pink. I think Grammie would approve now, knowing I didn’t chose pink for her — I was just being accurate to the stamp. 😉 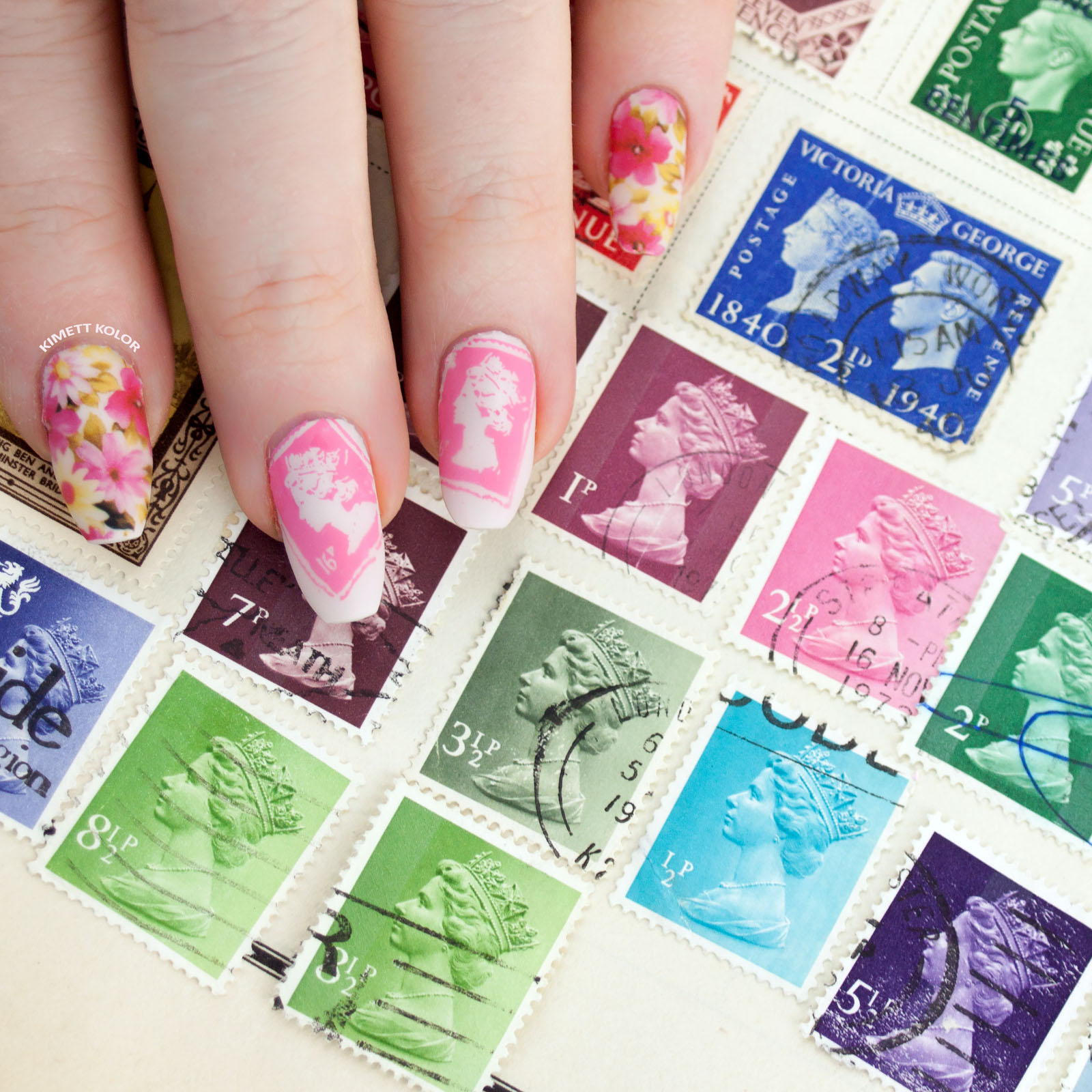 I’m posing my nails with one of the stamp albums Grammie passed down to me. Look at all those Machins! Yet, these are just the tip of the iceberg — there are thousands of these stamps in the series in various colors and denominations.

On a side note…doing things a little differently here…instead of taking pictures with my nails and the flowers growing outside; I thought it would be clever-er to bring some flower cuttings inside.

Well – it was a great idea. Except — maybe choosing the peonies was not so smart. Boy howdy – are they ever pungent!!! After doubling my allergy meds…and airing out the house…a learning moment was had. Next time — chose the non-fragrant flowers Kimett!! 😉 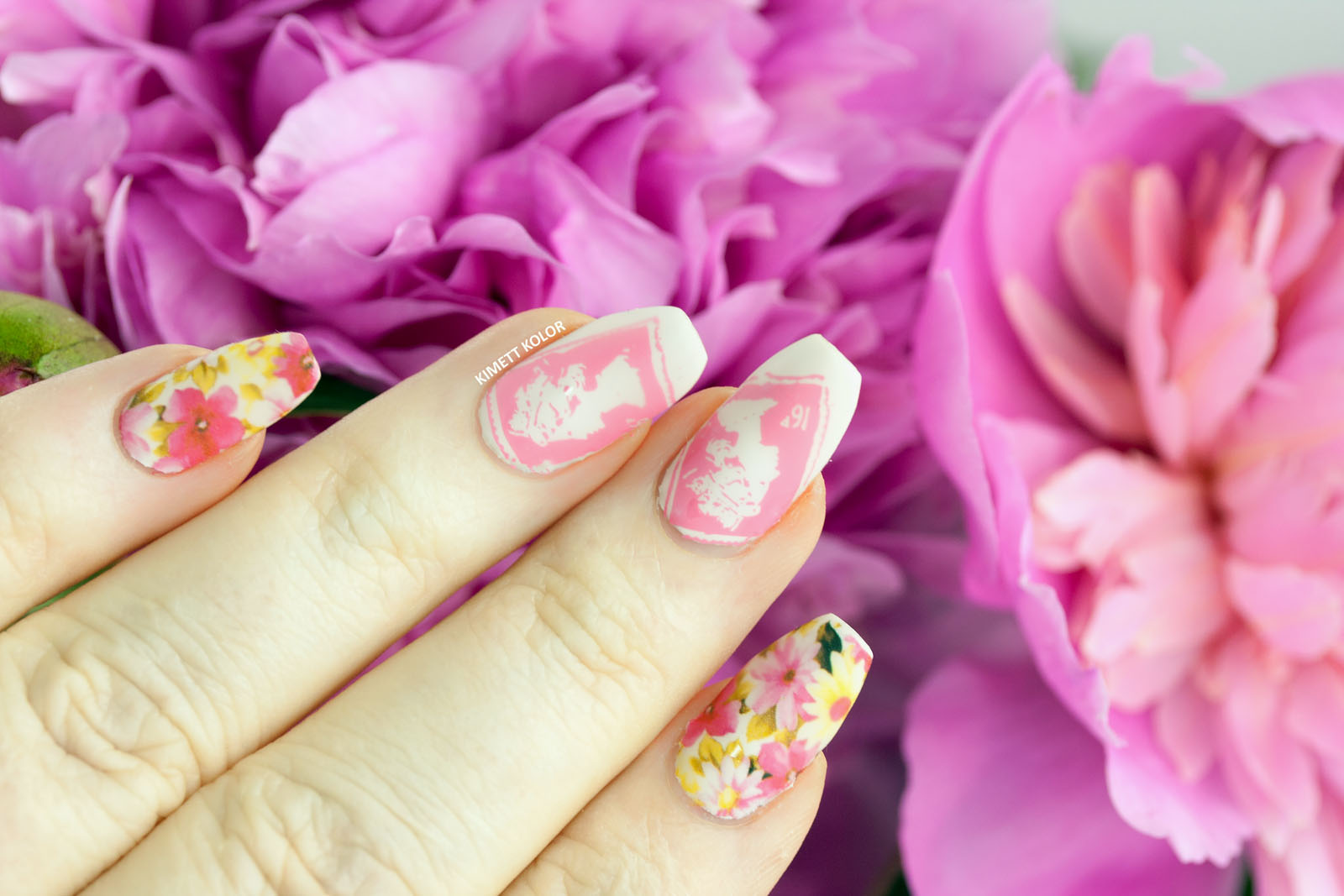 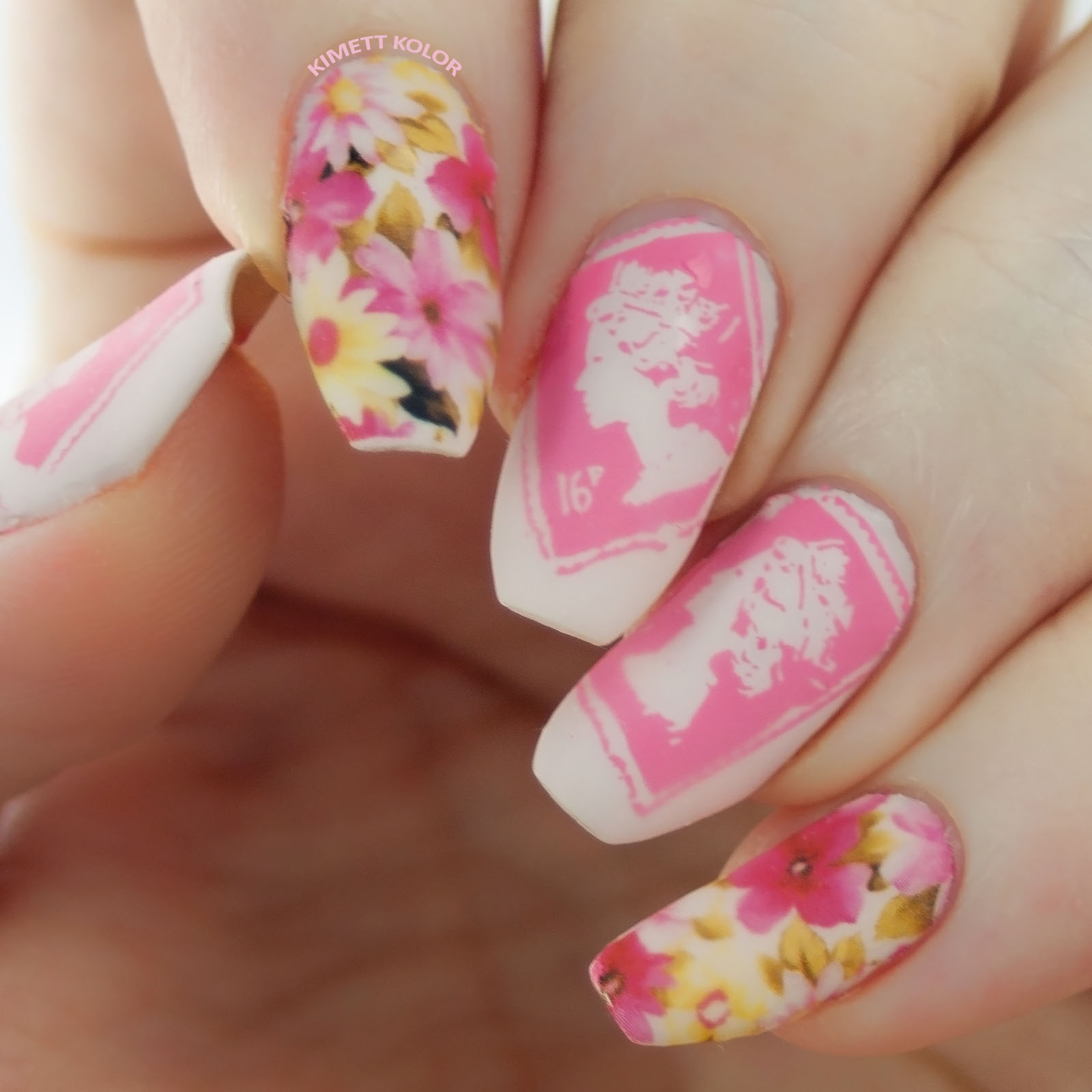 Putting this design together with my Grammie in mind, brought up all sorts of fond memories. I do hope that she knows that she is a Queen in my mind every day.

Thank you so very much for sticking with me and being a fan of this little quirky nail art blog!!! There is so much gratitude coming your way right now!!! Do you feel it??