These everyday style nails should be at the beach. Or at the very least, having some fun in the sun – don’t you think? Actually these weren’t built in the sun (or made in the shade, either – LOL), fun was had. There was no particular outcome in mind. There was zero plan. Consequently, there was only play time. Squee! Seriously though, if you’re interested in Moyra’s Foil Stamping Polishes like I was, I can say after a quick tryout that they are pretty spiffy indeed!

It’s the start of a long weekend here in the States, and some of my readers want to go enjoy a picnic, take a swim, and then watch some fireworks. I guess you could say that some people would want to start their summer that way, rather than read a long blog post. Huh. Okay then. I’ll dive on in. And, since I was a good Kimett who remembered to take some pictures along the way, I’ve got those to share too.

Alrighty. Before all gets too fancy with talk of foil stamping and the like, let’s start at the beginning. You might recall those 5 red-orange polishes from the most recent round in the Battle of the Kolors? Well, that buffet of pink grapefruit goodness became the color base under today’s nail art.

While staring at these orange nails, the first design idea that came to mind had patterns – similar to ones used in fabric. Like bathing suits. So, of course, I reached for UberChic‘s infamous Texture-licious plate. Using a light peach stamping polish, I first added this hatched line image:

Since my base polish colors were different, I decided it would look best if I kept the stamping images consistent on all the nails. Although, keeping things random, I did turn this image in different angles and positions when lining it up for each nail.

Okay, so then what? Well, it looked a bit boring with all the colors from the same family — so I thought about adding a punch of another color. I grabbed an aquamarine stamping polish knowing that would do the trick. Hmm….now considering this color scheme… a western motif came to mind. Ergo, I picked a Santa Fe type pattern from another of UberChic‘s plates, Wild West 02:

Because the image was structured with a horizontal direction, I thought it should face the same way on each nail. But staying with my original idea of a random fabric motif, I moved the stamper left/right, up/down a little bit when placing the images onto my nail. In other words, it was intentional mis-alignment. Or in better words, I meant to do that. LOL.

Are We There Yet?

By the way, the above heading is also the name of the OPI polish that I’m holding in these pictures. Funny and fitting, right?

Okay so, I’m not ashamed to admit, I hit a wall creatively at this point. The western look didn’t pan out like I thought it would and I didn’t know how to get back to the bathing suit idea. Mojo went off somewhere for a nap. It was time to ask a friend for her advice and she suggested gold accents. Specifically, she nudged me to try out the foil stamping with gold foil. Isn’t she a smart cookie!

My hand reached once again for the texture plate where I got the first image from. This time I used the splatter image. Also, just like I did with the other pattern, I rotated this one around when aligning it with each nail trying to keep it random. Fortunately, UberChic‘s stamp images are large enough to do that while still covering the whole nail.

The gold really ties all the different colors together, yes? And, it gave the design the finished look that it desperately needed too. What do you think?

I’ll chat more about the foil stamping polish action next, but first here’s the run-down of everything used and images of those stamping plates so you can pick out the ones used.

Foil stamping means applying foil only to the image that was stamped. While I have previously stamped on top of foil after it is already glued on the nail; this was the first time I’ve tried making the stamped image become a foiled image.

Technically it is possible to stamp with regular stamping polish and then apply the foils to that. But, I understand it can be a bit nerve racking to do it quickly enough so that the polish is in the right state for the foil to adhere. It needs to be not too wet, but also not too dry. And some stamping polishes just aren’t sticky enough for this purpose. So when Moyra came out with foil stamping polish it peaked my interest. According to their video, the foil stamping polish is both more adhesive and slower drying.

I’m happy to report that I found the foil stamping polish very easy to use. Although I did purchase some of their magic foil, I can’t speak on that yet. This time around, I chose to use the regular cheap-o nail art foil. Every stamping action was done the same way as always. Working one nail at a time, I stamped the splatter image with white foil polish. Then, using a piece of the gold foil (previously removed the backing with acetone — yes, it was that kind of cheap nail foil), I pressed it over the nail and then removed it leaving the foil that stuck to the polish behind.

I could tell when I used the right motion in removing the foil because I got much better coverage. In the places where I didn’t, I just used another area of the foil over it again. There was no problem getting the foil to stick even after a minute or so. Having said that…in case you have eagle eyes and were wondering about the few white areas where there is no foil – it was not the product’s fault at all. It was because I didn’t see them until I was reviewing these photos – woops!  And on another note, as can be expected, the top coat I used wrinkled the foil. If you’re going to give this a try, you may decide to use a top coat that won’t degrade the foil.

I’ll be the first to admit, these came out pretty. They were attractive to wear and weren’t overly in people’s faces either.

And finally, what good is it to have created a nail design that reminds me of a bathing suit without taking them for a spin in the sunshine. Check out the foil glistening in the afternoon glow:

Well, dear readers, thank you so much for perusing my nail art today. Now, it’s time I let you go enjoy that strawberry pie….but before you get out the forks, please take a moment and make sure you joined my subscription list. Don’t miss out on future posts!

END_OF_DOCUMENT_TOKEN_TO_BE_REPLACED 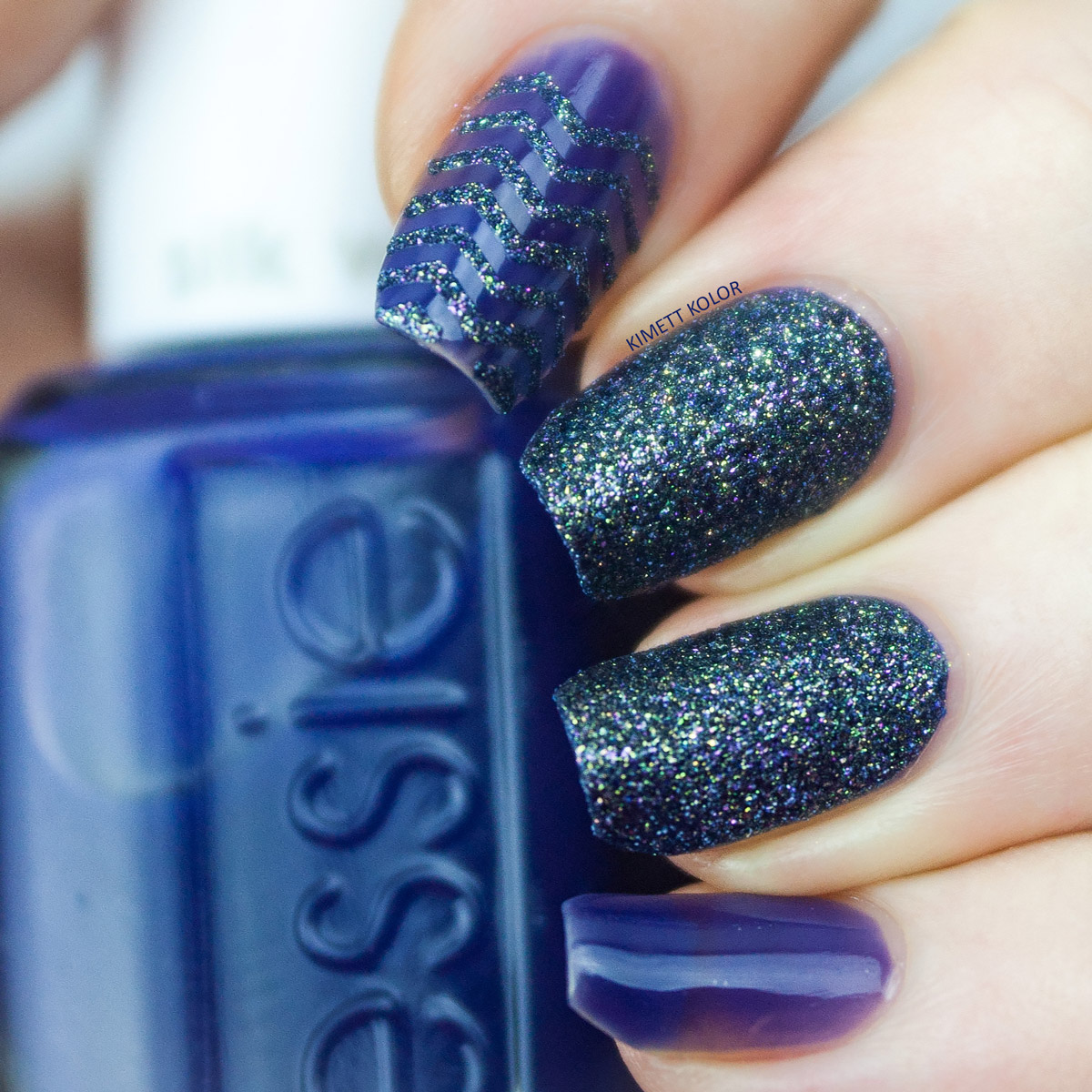